How I Became a Teacher 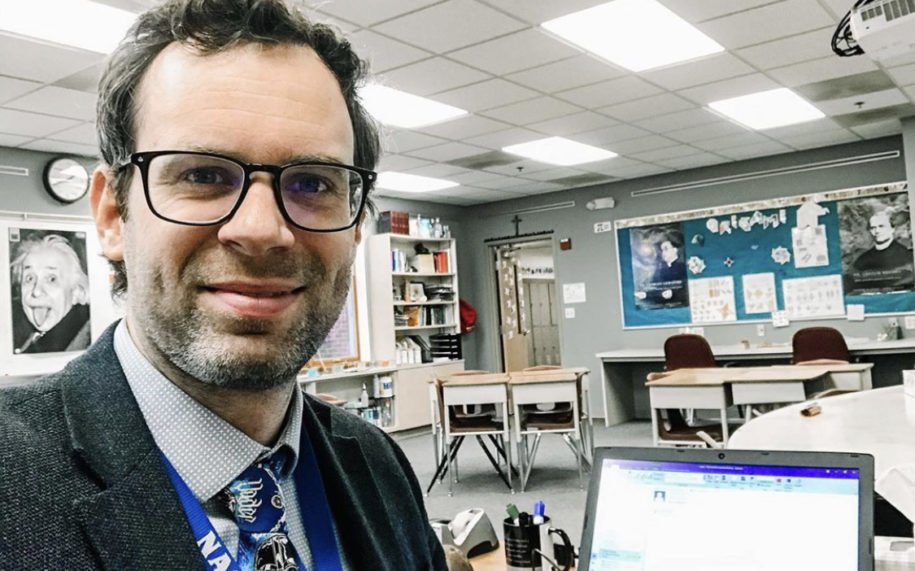 Teacher: Dylan, what would you like to be when you grow up?

Me: A garbage man

Teacher: Oh…ok.  Why a garbage man?

Me: Well, that looks super fun getting to hang off the back of the truck!

Teacher: I suppose…  Well, what about another profession?  Like, say…a teacher!

Yeah, becoming a teacher never appealed to me as a profession growing up.  That was something all the girls in the class wanted to do. And girls were gross (well, they were then!) But I digress.  Why would I want to be that weird old male teacher? You know, the one who couldn’t make it in the business world, so he had to settle to be the math or gym teacher.  You know what they say, “Those who can’ do, teach. Those who can’t teach, teach gym!” I would have literally hauled trash around all day than be a broken down poor sod who had to pander to bratty kids all day.

Hey Mister! Do you want to make sure kids stay in single file lines all day?   Yeah, no, I’m good.

Do you want to drive a 25-year-old Toyota Corolla for the rest of your life?  No, I’ll take a job that actually pays money, thanks so much.

I mean, I wasn’t exactly Joe Academia, but I figured I could get out there and somehow finagle a high paying job and far remove myself from the prison that was my elementary school.  And yet, years later, I would find myself returning to my roots. And not kicking and screaming!  So what in God’s holy name happened that had me seeking the sanctuary I had so deeply undervalued as a child.  Good question! Grab yourself a glass of wine and settle in!

Do you know what is awesome?  College! Do you know what is not awesome? The real world…  It’s like the opposite of college. Maybe I just had too much fun in college.  In retrospect, the freedom that is afforded to one in college, one who spends the first 18 years of their life under 24-hour surveillance, is a recipe for trouble.  Also, I was in a fraternity. So yes, I spent most of my time being a dick head, drinking, hitting on girls, and usually all three at the same time.

My point being, I was not prepared for life in the ruthless adult world that eats frat boys alive.  I didn’t have a cushy job at daddy’s firm to rely on. My father was a hard-working American who instilled in me good values.  He taught me to be competent, dependable, hardworking, honorable. All that good shit. He wasn’t about to coddle and spoil me even if he could.  It was time to man up. Just one problem: Like many of my fellow college graduates and alumni before me, I was about to face a big-time reality check.

I was in no way prepared for the real world. I was not prepared for the stress, the ambiguous moral attitude of fellow coworkers and bosses, and did I mention, stress?  It did not help that my first job was as an insurance salesman. Yes, the pinnacle of career choices that all young men aspire to… talk about an environment filled with assholes.  I mean, you thought frat bros were bad. These guys sexually harassed anything with two legs who scored a 3.5 or better on the “hotness” scale. You didn’t have to be a woman to want to gag. They seemed to actively avoid their wife and kids.  Many of them cheated on their wives, or at least tried to, and would openly brag about this “accomplishment.” Those who tried and failed, probably failed because often their personal hygiene suggested: “I spend a lot of time in strip clubs”.  All this might have been bad enough, but it also turned out that I was a shit salesman. I was still driving my mom’s old minivan from high school because I was the guy who couldn’t sell life insurance to his dying grandmother. My boss, who seemed to originally have big hopes for me, soon started looking at me like he suspected I slept with his daughter or something.  I did not, although my esteemed colleague who was pushing 3 bills, was 35 but looked 65, and had hair plugs, informed me that she was 18 and ”super hot”.

Anyway, that wasn’t working out.  I needed to get out of that environment immediately.  I quit my job, was forced to move into my brother’s place, and had to get a job working at “Glory Days Bar and Grill”  I don’t think Bruce Springsteen would spend any time in this place. I affectionately referred to it as “Glory Holes”. If they had had actual glory holes in the bathrooms, that might have been an improvement.  It had one of those bathrooms where every surface was constantly soaking wet.  Like, no dry surface to be found, as if moisture was sweating from the walls and ceilings.

Things were not exactly looking great for me.  Having graduated from college with such high hopes, I was now working at a place with high schoolers and college kids whose biggest aspirations in life were to one day become the manager at the Applebee’s across the street.  I literally felt like I was in the middle of the “Waiting” move, except I didn’t work with Ryan Reynolds, Anna Ferris, Dane Cook, or my main man Luiz Guzman. I’m bad-mouthing the place, but the real problem was me. I could never seem to get comfortable with the clientele. This was probably mostly due to the fact that I was constantly worried I would fuck up their order, and did that with regularity.  The computer we imputed orders into was my enemy. The ditsy blonde who was going to community college for “hotel management” was an ace on this fucking machine. Meanwhile, I was like Owen Wilson in Zoolander, hopelessly smacking the machine in the hopes that it would unlock its secrets. It was sad. It was really fucking sad. My new boss seemed to hold a similar opinion to me as my insurance sales boss.  Plan B was failing.

Plan C was teaching.  This didn’t excite me at first because this was the grade I got in most of my classes in high school and college.  Did I mention I wasn’t exactly a stellar student? The mere thought of going back to the classroom was enough to induce a panic attack and make my forehead bead with sweat like the walls of Glory Days’ bathroom. There is an irony here I’m sure:  I don’t think I built up enough good Karma points as a student to warrant this being a good move on my part. To have to return to academia as a teacher, to have to deal with little miniature versions of myself, may have been what was waiting for me in purgatory or something.  However, Glory Days was no longer sustainable for my ambitions, wallet, ego, or mental health, so I needed to get back on a serious career trajectory.

Back in my college days, one of my good buddies dragged me up to New Hampshire for the summer to work at an all-boys “stay away” camp.  This place was like heaven on earth. Every day I sucked in the impossibly crisp mountain air and set off to “work”. It wasn’t just the campers who had all the fun:  Every day I played tennis (and gave tennis lessons!), went for a swim in the crisp cool lake, frequently went on day and overnight hikes or canoe trips to gorgeous destinations, and ate like a king at the camp mess hall.  Counselors had plenty of opportunities to water ski, sail catamarans on a windy day, and climb world-class rock faces, all in our “backyard”. And all of this recreation was set to the most beautiful backdrop you can imagine: a gorgeous crystal lake, lined by the majestic White Mountains, and dominated by a beautifully blazen azure sky.  Only a place such as this could bring out the poet in me!

But that wasn’t even the best part of my entire experience.  It was the people. People I actually looked up to and admired.  People whose various backgrounds, experiences, and skills I got to learn and grow from each day.  And appreciate and admire! These were quality, wholesome people I could look up to and admire. Ok, sure, we got into our fair share of trouble!  When you are stuck at an all-male camp for days at a time, you tend to let loose when you do get the time off. But those are stories for another time…  Anyway, for reasons that hopefully I’ve made clear, many of the senior counselors came back year after year, and these were the guys I looked up to the most.  The reason these guys had a nice 2 ½ month hole in their schedule, to bask in this glorious paradise, was because they worked in a classroom the other 9 ½ months.

However, the thought of also becoming a teacher had never penetrated my thick skull.  It wasn’t until my dear mother dropped the suggestion during my “post-college struggle” that I even considered it as an option for myself.  I must have been in the middle of my umpteenth story about camp. I had basically turned into that nerdy/horny girl from American Pie who was always like, “this one time, at band camp…!” So when my mom says, “Dylan, why don’t you try becoming a teacher?  All you ever talk about is that damn camp!” It was a bit of a revelation for me. I felt a bit silly. I did love camp. And camp was all about developing relationships, mentoring and helping youth succeed and have fun, and inspiring these kids to reach their goals while developing social and practical skills.  And I was damn good at it too! “Mom, you are right” are generally considered some of the hardest words to utter for a young man or woman who doesn’t want to take advice from nobody! However, I spoke those words then, but that didn’t stop me from spending the next few weeks trying to convince myself that I had come up with this brilliant idea on my own.  I would become a teacher! Fuck it! I was going back to school!

Next time I’ll tell you how I transitioned from the lowly title of Restaurant Peon to Educational Rockstar!  In the meantime, please consider supporting Tipsy Teacher Wine. It is our mission to support hard-working, undervalued, and underfunded teachers.  A portion of our proceeds is rewarded to these very teachers who would otherwise have to pay out-of-pocket to pay for classroom expenses.